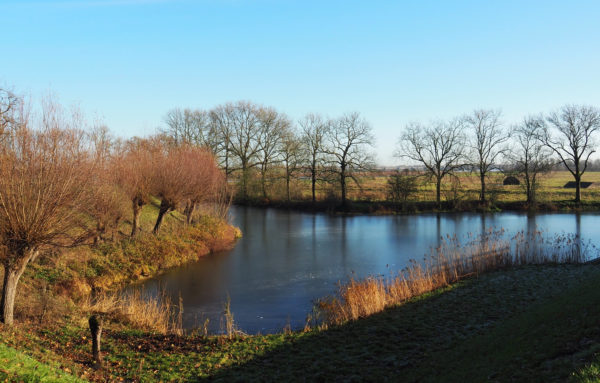 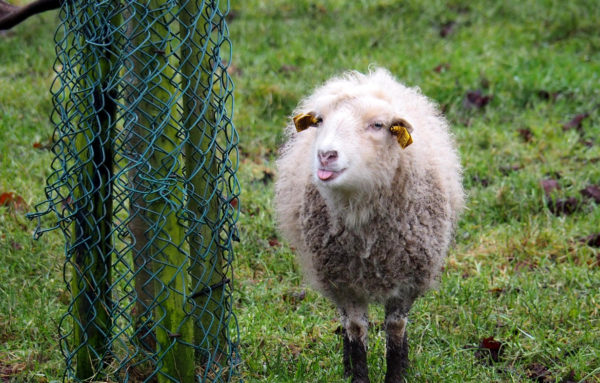 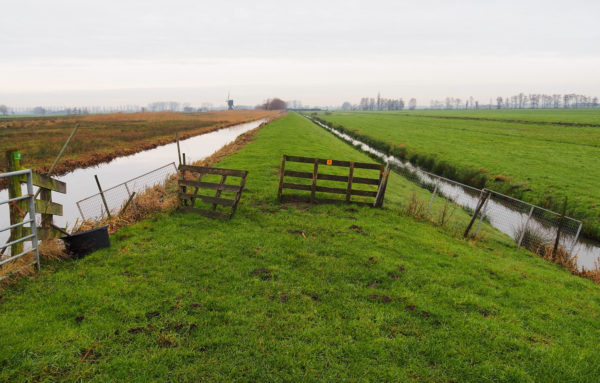 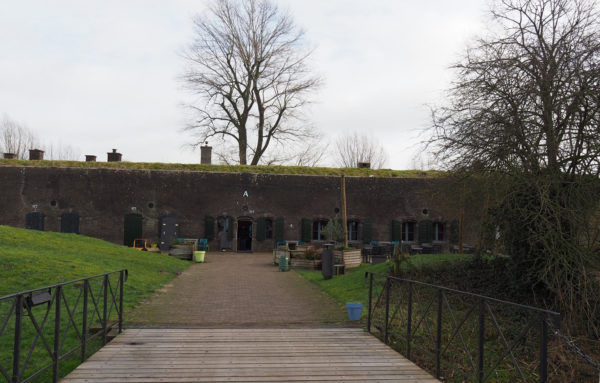 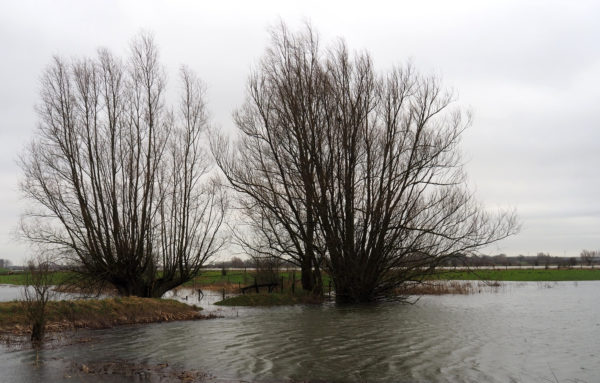 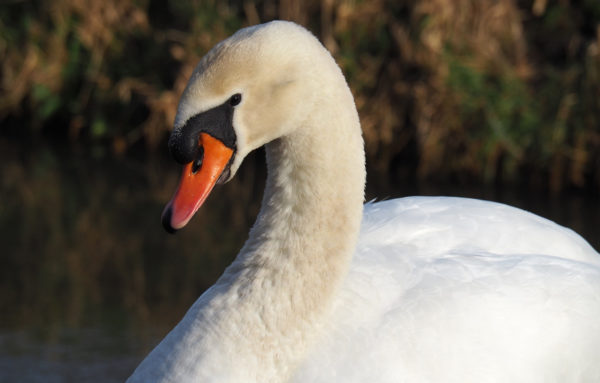 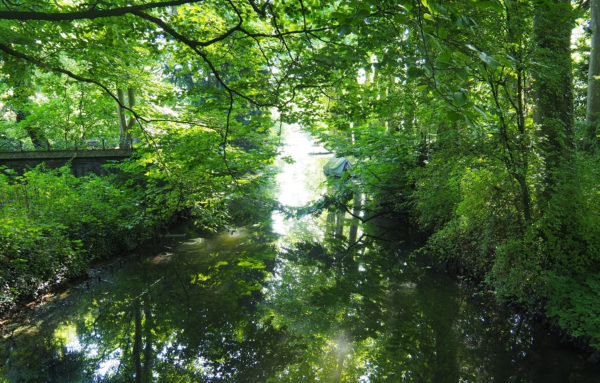 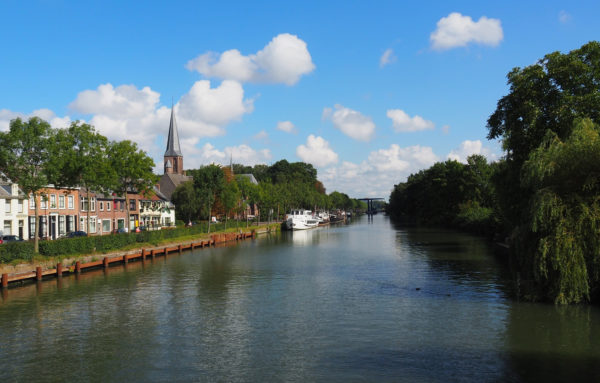 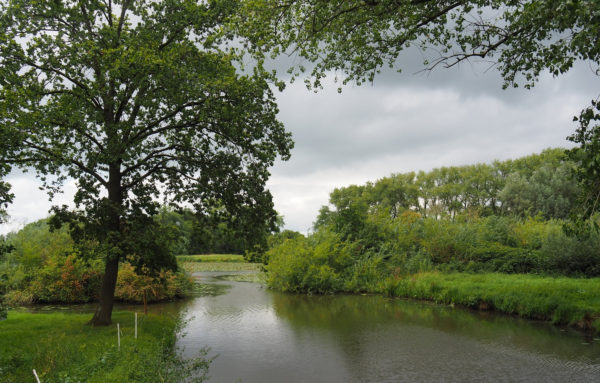 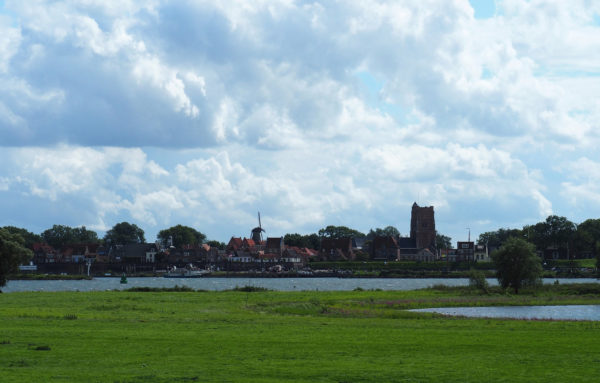 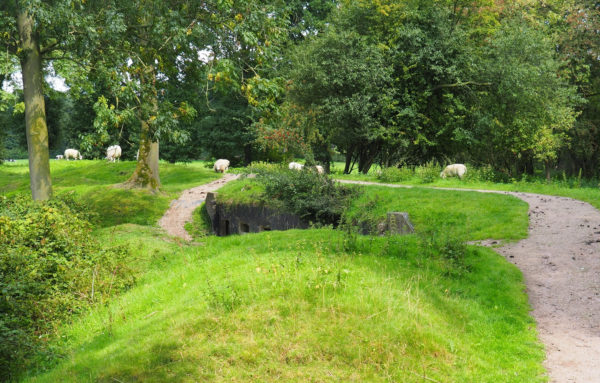 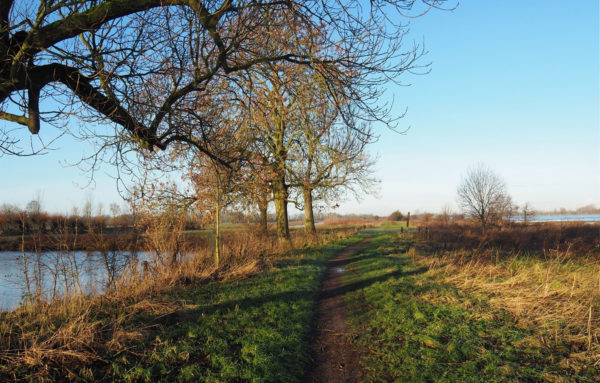 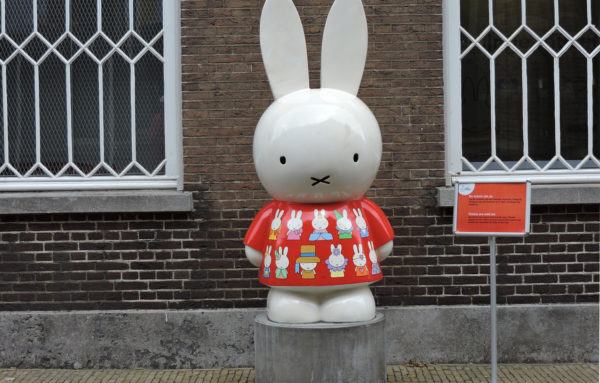 
You’ll walk a wonderful tour of a week-long through the area of the Dutch Waterline. You’ll have plenty of variation in the walk. You’ll pass through typical Dutch polders, and along some of the mighty and less mighty and meandering rivers, like the Waal, Lek, the Giessen and the Linge. You’ll walk on dikes and through the floodplains, where you can see a lot of different birds (like many egrets and herons).  You’ll pass through the wonderful old town centre of Utrecht with its canals and its unique church tower. You’ll pass through some picturesque towns, like Heukelum, Goudriaan, Gorinchem and Nieuwpoort. You’ll pass through the Betuwe, the fruit growers region of the Netherlands, wonderful in spring and tasty in the fall. And of course you’ll walk past the typical elements of the Dutch Waterline, like canals, locks, fortresses, and other defences. This tour really combines the typical landscape of Holland with a very typical cultural element of the area very well.


A large part of the Netherlands is underneath the sea level, and even if it isn’t, it is often underneath the level of a nearby river. Still, we keep our feet dry, and the Dutch are well known for that fact. However, there have been times in the past where we intentionally flooded the land. This was part of the defence system of Holland. If you flood the land with enough water to make walking through it virtually impossible, but not enough water to use ships or boats, it is hard for the enemy to get close to you. To be able to do this, flood the land, but not too much, a system of rivers, locks and canals and dikes has been set up to control the water level. This defence line is called the Dutch Waterline. The first Waterline was set up in the late middle ages and it protected what is now a small part of Holland. You’ll start and end your walk near this line. In the 19th century a second line was designed which was a bit wider, and which you’ll follow for the larger part of the tour. Except the waterworks, the line was extended with fortresses and other defence works. This newer Waterline was used at the beginning of world war II, but after the invention of airplanes, it appeared to be less useful, which is why most of the fortresses now have a different destination. 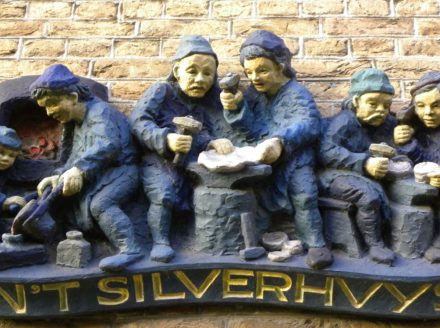 Pay a visit to the Dutch Silvermuseum

You arrive at your hotel in the centre of the little town Schoonhoven, where you are able to park your car for free for the next days. Feel free to explore the little town after you have settled in at the hotel. You can visit for example the Silver museum, a museum about the art of Silver. Or you can stay at your hotel and enjoy the traffic on the river. 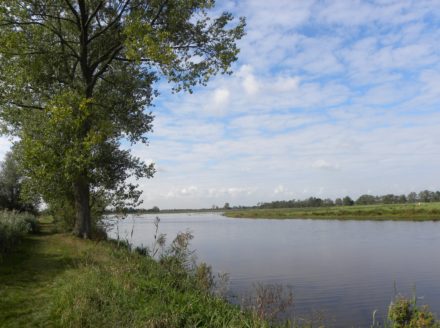 A loveley path between Schoonhoven and IJsselstein

Today your tour starts with a brisk walk to IJsselstein. You’ll leave the town of Schoonhoven and walk the first part of the day on an old tax road through the polder Lopikerwaard. This area used to be a swamp until the 11th century, which is why you’ll see a thousand ditches. Then you’ll cross over to the river Lek. This is a wide river and you’ll see many ships heading to Germany or Rotterdam. You’ll walk on the dike, but also through the floodplains of the river. Depending on the water level of the river, the floodplains can be bigger or smaller, but they are accessible to hikers almost 99% of the time (and else you can walk on the dike, and the views of a flooded river are even better). Then we head back into the polder to the meandering small stream Enge Ijssel which runs through the charming village of Lopikerkapel. Finally you’ll arrive in the old town centre of IJsselstein. Today is a crossing from the old Dutch Waterline to the new Dutch Waterline. 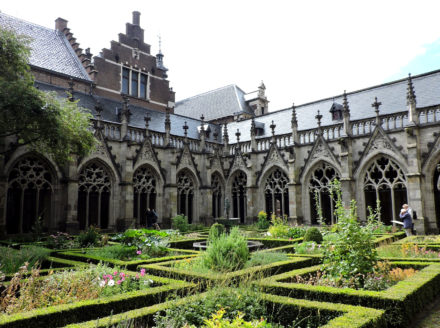 The courtyard of the Dom of Utrecht

Today you’ll walk from one of the suburbs of Utrecht to the old centre of town. From IJsselstein we follow the river Ijssel for a while. This brings us to the town of Nieuwegein where we walk through the old city park Oudegein. Then we walk through the first Waterline fortress of our tour, fort Jutphaas. We make a tour through it after which we head in the direction of Utrecht along waterways and past a sluice. Once in Utrecht, we make a tour through the old centre, where we walk on the famous wharfs of the canals, and we pass underneath the Dom Tower, the hundred meters high church tower. You’ll end your day in a hotel on the edge of the old town centre. 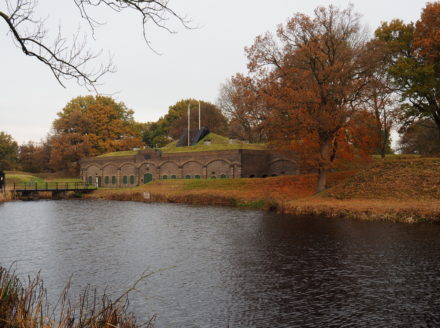 On of the 6 forts you'll see during the walk

Utrecht is not only a great town to stay a day extra in, but is surrounded by many forts of the waterline, definitely worth a visit. So we’ve designed a hike that passes no less than 6 of these forts. These forts were built in two steps. Most of them were built around 1820, and are quite close to the town. A second ring was built around 1870, and those are a bit further out of town. The forts are very different in size, from for Blauwkapel, which includes a small village, to Fort de Gagel, which is really small. Some are open for visitors and some can only be seen from the outside. However, apart from the forts the walk goes through some attractive nature areas around town, along an old river, and throughs some of the older neighbourhoods of Utrecht and is even without the forts a wonderful walk. Also it keeps you in Utrecht a day longer, and Utrecht is one of the most attractive old towns of Holland with its old canals, the highest church of Holland and its courtyards. So this optional extra day is definitely one to include in the tour. 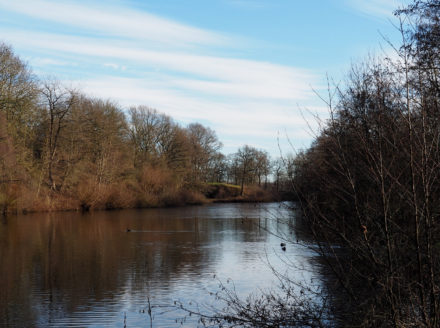 Today you’ll leave Utrecht and we head south. You’ll exit Utrecht through an old street with typical houses. You’ll pass the Unesco Rietveld-Schröder house, a domestic house built and designed by Gerrit Rietveld in 1923-24. You’ll find the meandering Kromme Rijn in nature area Amelisweerd. This will bring you to the fortress of Rijnauwen. Then head further through a field full of bunkers and there’s the next fortress, fort Vechten, which contains the Waterline museum. After passing through the fortress you’ll find the site of an old Roman settlement. After that you’ll walk on some quite polder roads to arrive at the canal between Amsterdam and the river Rhine. This canal will bring you to your comfortable hotel in Houten. 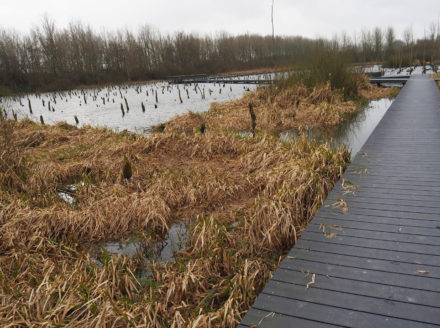 Drowned forest between Houten and Culemborg

Today the Amsterdam-Rhine canal takes you out of Houten. You’ll see inland vessels passing by. You’ll pass the canal and then head further south. You’ll walk on a boardwalk through the Verdronken Bos (drowned forest). Next on the route is a so-called inundation channel, built for the sole reason of flooding the nearby land. This canal takes you to some defence installations, like the Minor Fort “Work aan de Korte Uitweg”, a crescent-shaped fortress called “Lunet aan den Snel” and the fortress of Honswijk. This last fortress is located on the river Lek. The last part of the walk is through the floodplains of this river where there are wonderful willows, meadows, small lakes and lots of birds. Eventually you’ll arrive at the ferry which takes you to the other side of the river into the town of Culemborg. After a short walk through the old town centre you’ll reach your Bed & Breakfast for the night. 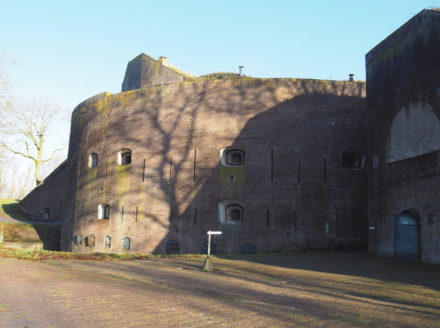 The next day you’ll exit Culemborg quickly in the direction of the fortress of Everdingen, in which you make a short tour (and which contains a good brewery, albeit a bit early in the walk). Then on small roads and paths you’ll find the Diefdijk (Thieves dike), built for the purpose of being the border of the flooded area of the New Dutch Waterline. It also served as a boundary between the counties of Holland and Gelre. You’ll walk around the “Wiel of Bassa”, a deep lake which was caused by a dyke breach. Through some mixed nature you’ll walk towards the river Linge and the town of Leerdam, known for its glass blowing and cheese. You’ll sleep in a nice hotel in the town centre. 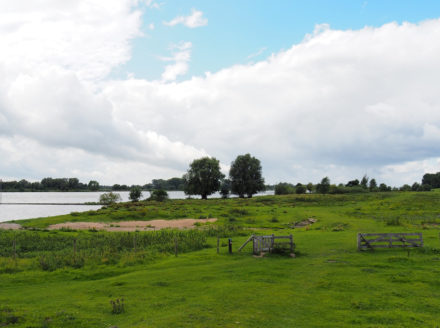 Hiking along the river the Waal

You’ll exit Leerdam through the town centre,, after which we find a nice path next to the meandering river Linge. You’ll pass through the Betuwe region, so you may find some fresh fruit in the first part of the walk. On the river is also the charming village of Heukelum. After the small harbour of the village, you’ll continue between orchards and woods along the Linge until we head south through the polders. You’ll reach the village of Vuren on the banks of the river Waal, and the fortress of Vuren is right next to the village. Then along the banks of the Waal, with views on castle Loevenstein, we’ll reach the fortified town of Gorinchem. After a walk through the old town centre, you’ll arrive at your hotel. 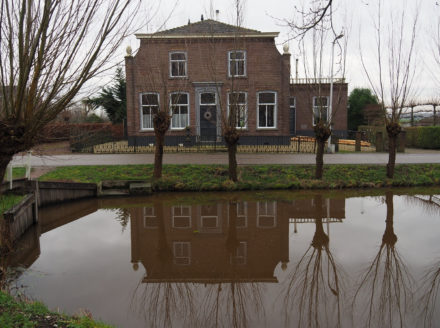 Beautiful old house in the lovely village of Goudriaan

On this last day you’ll walk back to Schoonhoven. After exiting Gorinchem along a canal, you’ll walk mainly through the polders of the Alblasserwaard. You'll see the wonderful church of Hoogblokland and past the village of Hoornaar. You’ll walk next to the winding river Giessen to the picturesque town of Goudriaan, a typical linear settlement along a small stream with some beautiful old farmhouses. Then after a bird-rich area you’ll pass a nice windmill to reach the town of Nieuwpoort. You are now back near the old Dutch Waterline. City hall of Nieuwpoort was built on top of the lock which could flood the area. This was down to protect the lock against angry farmers. From Nieuwpoort you can take the ferry back to Schoonhoven, where you arrive back in your wonderful hotel on the river Lek. 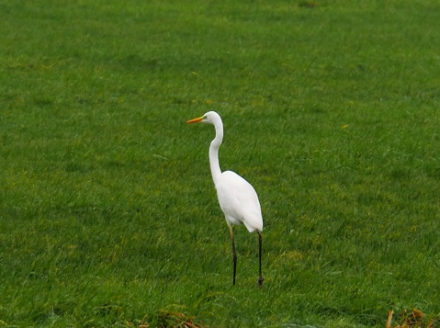 Today you can sleep in, maybe have a last look around Schoonhoven. You may explore the town some more, or you may just head home or to your next destination.

Extension of the trip is recommendable in Utrecht. In this old town there is a lot to see and do, and our walk only covers a small part of that. From Leerdam it can be nice to rent a bicycle and make a tour through the orchards and visit the glass blowers museum , (only in Dutch). From Gorinchem you can visit the nearby castle Loevestein and the beautiful fortified town of Woudrichem. Your start and endpoint of Schoonhoven is a good place to explore the green heart a little further or pay a visit to the Dutch Silvermuseum


Price is per person per night and includes breakfast and tourism taxes. 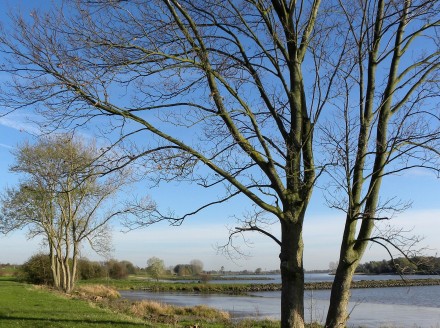 Criss-cross through the Green Heart of Holland 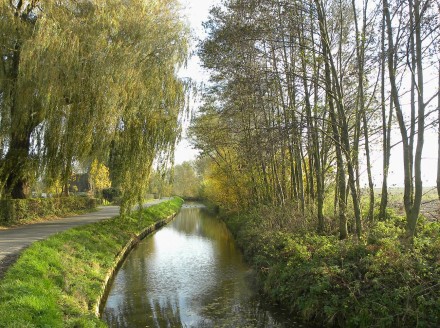 The Green Heart of Holland 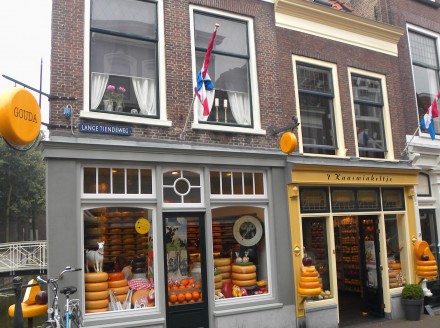 Walking along, rivers, lakes and through polders